Case Study: In The Words Of Pari Ibrahim 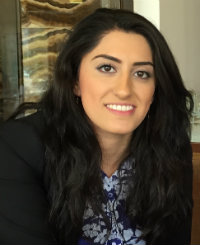 “My people have suffered a lot at the hands of ISIS. If you were a man, you were shot. If you were a woman, you were taken away as a sex slave to Mosul in Iraq or Raqqa in Syria. These women suffered enormous trauma. They have been raped many times a day by different men. That’s why I started the Free Yezidi Foundation ­- to try to get women and girls trauma care so that they can start living their life again as they used to.”

Pari Ibrahim described how ISIS attacked Yezidi civilians in Sinjar, northern Iraq, in August 2014. During the assault, she said, Yezidi women and girls were captured and sold as sex slaves in markets in Iraq and Syria, and that there are still thousands of Yezidi women that are held captive by ISIS, mainly in Syria.

“Where I come from, people don’t go to the doctor for mental health issues… So I thought that we needed to provide post-trauma experts from outside Iraq so that the women and girls could talk to them without shame and further stigmatization.”

The Free Yezidi Foundation opened a women’s centre that provides access to a psychologist and a trauma programme. The centre also runs music, art and language classes as part of efforts to reduce stress, and helps women prepare for employment through livelihood trainings.

“In the beginning, we saw these women and girls just sitting in the house doing nothing, not going back into society because they were ashamed of what had happened to them. We don’t blame them. They are victims of sexual violence, of rape.

“Deep inside, the victims are suffering immensely because of the associated social stigma that implies that maybe it is their fault that they aren’t virgins, that they can’t marry. In the beginning, especially, a lot of these women and girls committed suicide.

“The UN Trust Fund made it possible for us to get two psychologists from Britain. I did not want to make the women feel that they are worthless and I wanted them to share their experiences with someone who would enable them to express their feelings.

“One of the first things we ask when the women come in is how do they feel. At the end of the three-month course, how do they feel then? Are they happier? Are they more outgoing? Do they like to participate in activities? Do they talk about their issues?”

“We as the Free Yezidi Foundation, led by Yezidis, led by women, show them possibilities. They say that they feel comfortable and that we can help them build a future and build a new life.”