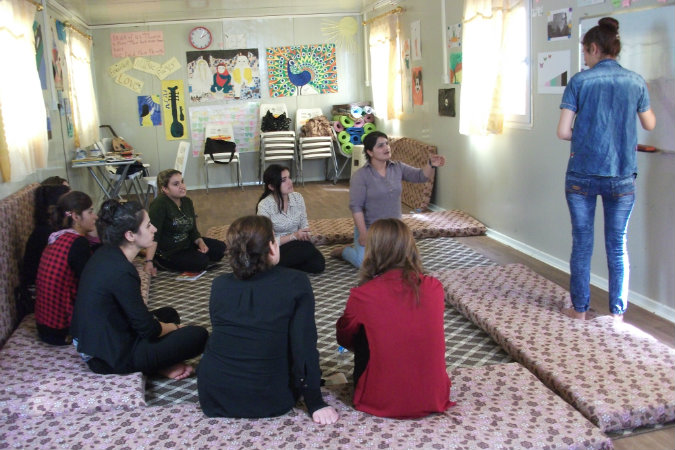 The continuing mass movement of people to escape war, insecurity and hunger has created numerous humanitarian crises. Women and girls, who currently comprise almost half of the 258 million migrants and half of the 25.9 million refugees worldwide,[1] find themselves with a heightened risk of violence. Support services are often absent or limited, just when they are most needed, and women’s voices and priorities are often missing from policies that do exist.

In response, the UN Trust Fund to End Violence against Women (UN Trust Fund) established a special funding window to support organizations that specifically address violence against women and girls in the context of humanitarian crises. Under this window, the UN Trust Fund is currently investing USD$2.5 million in five organizations – three in the Kurdistan Region of Iraq and two in Jordan. Beneficiaries of the special funding are implementing projects that integrate humanitarian work, such as providing emergency services, with longer-term solutions, such as economic empowerment training for women.

Applications for the second cycle of grants under the special window, to be awarded later in 2018, increased by a third (from 83 to 112), and the total funds requested rose by nearly two-thirds (from USD$35 million to USD$57 million).

Refugee women and girls in the Kurdistan Region of Iraq often continue to be susceptible to violence once resettled or in refugee camps. In addition to ensuring access to legal and health services to survivors, these UN Trust Fund-supported organizations, are empowering women and girls to reintegrate into their communities by offering skills training and trauma therapy.

In Duhok, the Free Yezidi Foundation enrolled 288 women and girls in trauma and mental health therapy sessions for survivors of violence. Those enrolled were psychologically assessed and then given individual follow-up sessions, including weekly therapy where needed. Several of the women survivors involved in the programme had been held captive by ISIS.

The Foundation’s centre also runs music, art and language classes to reduce stress, and trains women to prepare for employment. Social media outreach work has reached an estimated 800 community members. The project has trained three local volunteers as para-professional psychological first-aiders to ensure the project’s work is sustained. Women participants report an improvement in their emotional wellbeing and have learned positive coping mechanisms.

In Duhok, Erbil and Sulaymaniyah, a project implemented by ASUDA for Combating Violence against Women hired and trained six female researchers to collect evidence and monitor sexual and gender-based violence against female Syrian refugees. So far, data on 92 cases of violence within refugee camps and the surrounding urban areas have been recorded and analysed. A report was produced for dissemination and will further inform ASUDA’s work with relevant stakeholders.

The project has consulted camp administrators, service providers and local authorities on strengthening response mechanisms for Syrian refugees, including through community awareness workshops and legal and psychosocial support for refugee girls at risk of sexual and gender-based violence. It has also reached 100 Syrian women through five workshops on legal aid and other services. Eight additional workshops reached 65 men and 127 women to raise awareness about violence against women and how men and boys can help end such violence. 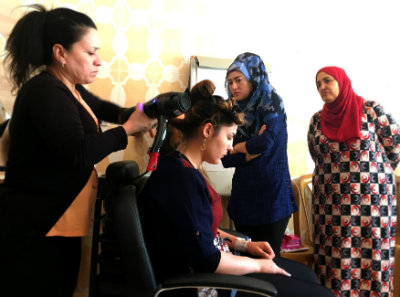 A safe space has already served 465 women with information about their rights, ending violence against women, and against early marriage. In addition, the space teaches women vocational and literacy skills and teaches men and boys about gender equality, gender roles and women’s rights.

In Nuzza and Sahab, two underserved communities south of Amman, the War Child Canada project is supporting women and out-of-school girls. War Child Canada’s centres run a 15-session programme that includes psycho-social support services for women survivors of violence and life skills classes, focusing on Yemeni, Somali and Iraqi refugee women and their families. It aims to reach 360 people in its first year. Sessions for out-of-school girls focus on mathematics, English and Arabic, and each class serves as a support group led by staff. The project is collecting data and training volunteers, and aims to share results of a survey with larger humanitarian organizations to improve interventions to support women refugees.