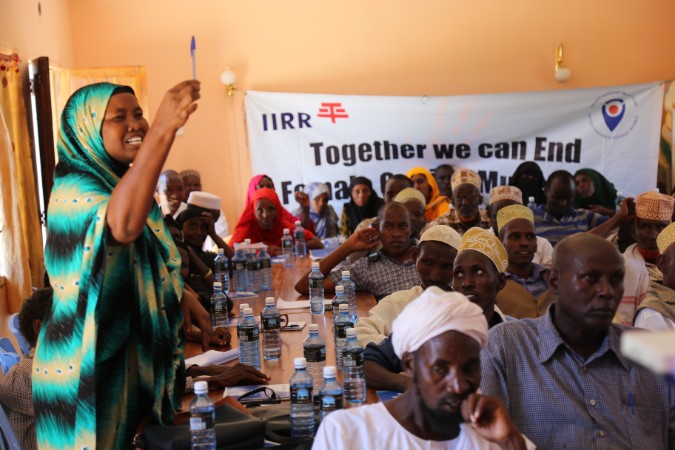 Participants in Kenya take part in an awareness raising meeting as part of IIRR's work to end violence against women and girls in rural areas.

Women living in rural areas often have limited access to resources and have greater difficulty than men in gaining access to public services, social protection and decent employment opportunities.[1] In villages in rural Kenya this is often the lived reality for women, increasing their risks of violence and harmful traditional practices such as Female Genital Mutilation/Cutting (FGM/C) and early and forced marriage. To reach women in rural areas, the International Institute of Rural Reconstruction (IIRR), funded by the UN Trust Fund to End Violence against Women (UN Trust Fund), implemented a project focused on addressing sexual and gender-based violence, ending early marriage and FGM/C in rural Kenyan communities. A participant in the project, Mama Rose Lekirpini from Wamba said, “I support IIRR in ending violence against women and girls. […] It is the first organization to ever penetrate through villages to meet women like me and teach.”

The project implemented by IIRR sought to improve the implementation of laws and policies designed to address these harmful traditional practices and end violence against women and girls. The approach adopted, entitled “Learning our way out - LOWO”, involved training local community-based facilitators to lead conversations with small groups and helping friends and neighbours to recognize the link between gender-based discrimination and women’s rights. In addition, the project worked to build a community-based referral system and to link survivors to legal support, medical services, psychosocial therapy, shelter and protection.

Working with members of the local government, such as Patrick Stelio Lembwakita, the Assistant Chief of Wamba, the project raised the awareness of local law enforcement in communities about the harms of FGM/C. Speaking about what he learned, Patrick said, “FGM has no benefit, only injuries and pain to the survivors and society”. A final external evaluation of the project found that nearly three-quarters of women interviewed believed that now laws and policies to prevent violence against women and girls were adequately enforced, compared to only 11 per cent who agreed before the project.

By increasing awareness and enhancing the capacities of law enforcement, communities are now providing better responses to violence through increased access to comprehensive services. This contributed to a positive change for women and girls with the evaluation of the project showing that nearly half of sexual and gender-based violence survivors interviewed reported having access to adequate multi-sectoral services, compared to 13 per cent of survivors at the beginning of the project.

In addition, community members became more aware of the harmful effects of violence against women and were more willing to change their behaviour and attitudes towards FGM/C, beading (a form of sexual exploitation against girls) and early and forced marriage.

Through targeted advocacy in local communities, community-based trainers are creating sustainable change. Sheikh Abdullahi Tadicha, an IIRR trained community facilitator, advocated with community members to end FGM/C. Sheikh’s advocacy focuses on community leaders who perpetuate FGM/C, and through his advocacy together with IIRR, communities are ending the harmful traditional practice of FGM/C. Sheikh said, “[This] is a good example of what creating awareness on the dangers of FGM can achieve. We are happy that [communities] listened to the message and changed,” says Sheikh Tadicha.

[1] United Nations, Economic and Social Council, Commission on the Status of Women, Report of the Secretary-General, Challenges and opportunities in achieving gender equality and the empowerment of rural women and girls, 12-23 March 2018, (E/CN.6/2018/3)