Dr. Isatou Touray, Executive Director of the Gambia Committee on Traditional Practices Affecting the Health of Women and Children (GAMCOTRAP) 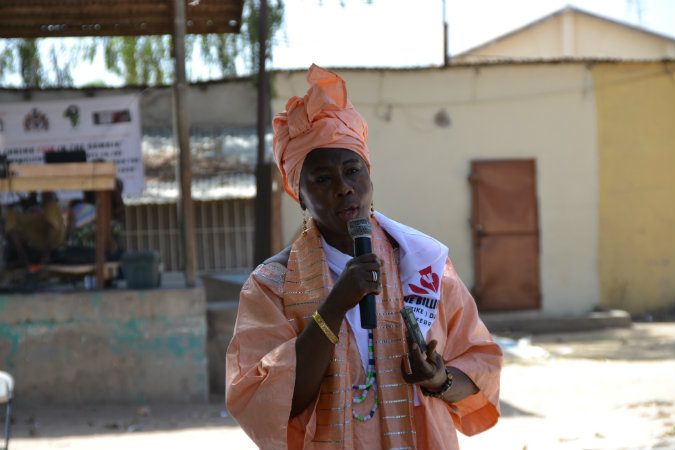 The UN Trust Fund to End Violence against Women (UN Trust Fund) supported GAMCOTRAP’s project “Advancing Women’s Rights and Ending Harmful Traditional Practices through Rights Education” in the Gambia from 2015-2017. An estimated three in four women and nearly half of all girls in the Gambia have undergone female genital mutilation/cutting (FGM/C), which causes irreversible harm to women and girls.

Dr. Touray spoke to the UN Trust Fund to explain the methods and successes of GAMCOTRAP, which has been raising awareness about the pernicious effects of FGM/C and early marriage for 35 years, and thanks to the consistent and tireless efforts of groups like GAMCOTRAP, the Gambia legally banned FGM/C in 2015.

“We’ve been gaining momentum right across the country where we build capacity, create awareness, raise the consciousness of the people”, said Dr. Touray. “[We] also engage with the traditional leaders because FGM is shrouded in secrecy, is a deep-rooted culture, and people associate it with religion, Islam.”

To make progress, the GAMCOTRAP engaged scholars, religious leaders and village chiefs in discussions about traditional practices: “FGM is about control of women’s sexuality. The myth surrounding it is all about promoting patriarchal principles of control over the bodies of women. When one of the leaders says ‘No’, that is what all the other leaders will say. The leader may be responsible for about 80 communities… Let’s say that 80 villages are there. Then you have 8 or 10 clusters. You have to run a three-day programme for each of those clusters, to cover young people, village heads, religious leaders, women of authority age, circumcisers, youth, traditional communicators. You are now breaking the culture of silence over the issue.”

Dr. Touray said that because FGM/C is about women, women have to take the lead. “They identify the content of the programme and we train them... about social mobilization and advocacy strategies, grassroots activism ­– and then they will be advocates. It takes a minimum of three years. [Then] there will be nowhere in the village, in the region, that will tell you, ‘I have not heard about FGM’. Nobody will tell you, ‘I have not heard it on the radio” because we back [our work] up with community radio programmes.”

The “Dropping of the Knife” ceremony is key to sustaining the work, said Dr. Touray, as it involves the community publicly pledging to end FGM/C.

Dr. Touray’s stance has not been easy, and she has faced challenges. She didn’t allow her daughters to be subjected to the harmful traditional practice and consequently was ostracized by her family for about five years. Now, she said, none of the girls in the extended family are being cut.

“I want to give credit to the communities and the chiefs who have led the campaign. We were only facilitating for them. We were empowering them with the right tools, the right instruments, and listening to them, coming back, preparing the strategy and taking it back to them. And it has worked… 1,115 communities are dropping [FGM/C].”

An estimated 200 million women and girls alive in the world have suffered FGM/C. Globally, the UN Trust Fund supports 27 grantees that are working to change mentalities and attitudes that perpetuate harmful traditional practices and violence against women.