“SASA! gives you the ability to understand your individual power and strength.” – A female community leader in Dadaab refugee camp, Kenya 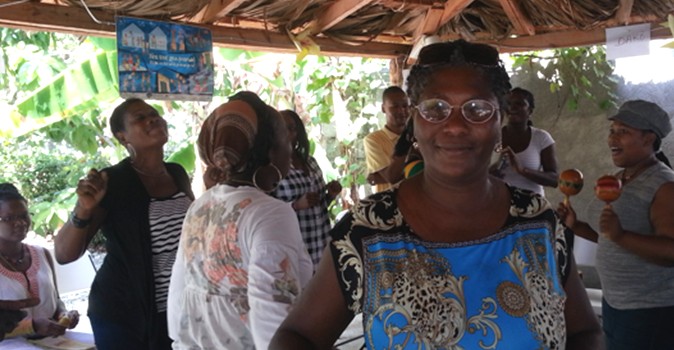 Raising Voices, a Uganda-based non-governmental organization dedicated to preventing and ending violence against women and girls, implemented an adaptation research study of its successful methodology called SASA!. The SASA! approach aims to change social norms by addressing the imbalance of power between women and men – a key driver of violence against women.

The SASA! methodology walks communities through a step-by-step process, engaging a critical mass of people across all levels of society to bring about change.

From 2010 to 2012, the UN Trust Fund to End Violence against Women (UN Trust Fund) supported Raising Voices’ first cohort of organizations across eastern and southern Africa to implement the SASA! methodology. The methodology was rigorously evaluated through a randomized controlled trial of one project in Uganda during which communities using the SASA! methodology reported a significant reduction in the rates of physical partner violence: 52% lower than those reported in control communities.

Over the past three years, Raising Voices collaborated with three partner organizations – in a community in Haiti (Beyond Borders), in rural Tanzania (Women’s Promotion Centre), and in refugee camps in Kenya (International Rescue Committee), – to study the adaptation of the methodology to suit different contexts. Through a second grant implemented from 2015-2018 from the UN Trust Fund, the project conducted research in order to learn from the three sites and; develop guidance on how to adapt the methodology most effectively and maximize the efficiency and cost-effectiveness of interventions.

In Haiti, Beyond Borders adapted SASA! in its community-based initiative, Rethinking Power. Aiming to address root causes of violence and the imbalance of power between men and women, Beyond Borders’ adaptation of the SASA! methodology involved not only translating materials, but also ensuring they fit the cultural climate by being approachable to the local Haitian community. This included adjusting the images and activities to properly represent topics that were new to Haitian culture by involving community members in this process. Following the successful adaptation, Beyond Borders is currently continuing this work through a grant from the UN Trust Fund to ensure that the adaptation of the SASA! methodology is inclusive of women and girls with disabilities.

A community activist in Haiti shared that, “I came to understand violence against women does not only concern women, but it concerns men as well… I got involved and was motivated to balance power in my community, for my community to work better, for families to be better off.”

In Tanzania, adaptation by the Women’s Promotion Centre focused on not just the translation of materials from English to Kiswahili but ensuring that the content was applicable to people living in rural Tanzania, with constant incorporation of feedback from the community. Implementation of the methodology altered norms around gender roles, educated women on their right to live free from violence, and led to a decrease in violence. Initial findings showed that women began to realize that they have the power to claim their rights and speak out against violence.

A member of the SASA! Network in Tanzania said, “This programme is very important because it challenges us... People realize, ‘I don’t have to mistreat my fellow [community member] and nobody has to mistreat me’.”

In Kenya, International Rescue Committee’s adaptation focused on using SASA! along with other approaches which actively involved the community through engaging religious leaders in humanitarian settings. The lessons of this implementation will inform other organizations working to integrate prevention work into humanitarian response. A female community leader in the Dadaab refugee camp in Kenya commented, “SASA! gives you the ability to understand your individual power and strength. It has untapped our greatness and the right we have… As a result you become a person of high self-esteem.” The project has led to the development of a new toolkit for adapting SASA! in humanitarian settings.

Today, more than 60 organizations – including NGOs, governments, UN agencies and faith-based groups – are implementing the SASA! methodology in over 20 countries.