Case study: Ensuring access to justice for women and girls with disabilities in Zimbabwe

LEAVING NO ONE BEHIND 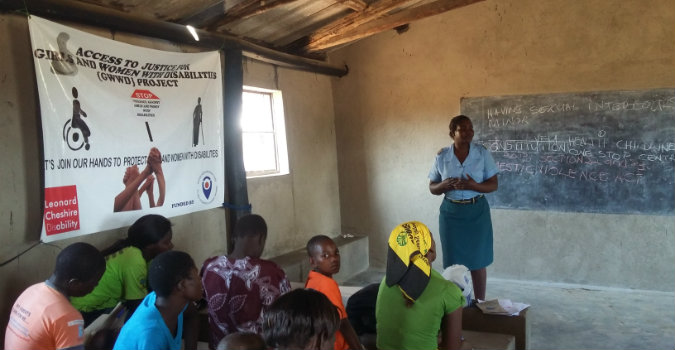 Participants take part in a meeting about accessing justice for women and girls with disabilities in Zimbabwe. Nobuhle Moyo/Leonard Cheshire Disibility Zimbabwe Trust

Ashley Ncube, who is a survivor of violence, already faced challenges and discrimination as a deaf young woman growing up in Zimbabwe. There are no schools for deaf children in the rural community where she comes from, so she stays with family in town to attend a school with classes for deaf students. “Girls and women with disabilities are not involved in many community activities. Deaf children play alone, people also don’t like us. […] Most of the people in my community don’t know sign language so it’s hard for me to communicate with other people,” said Ashley about her experience in the community.

In addition to the types of abuse faced by all women and girls, those with disabilities are also at risk of forced or coerced institutionalization; forced abortion and/or sterilization; denial of medication, mobility aids or communication equipment; and intentional neglect or the threat of withdrawal of care, among other risks.

The UN Trust Fund to End Violence against Women (UN Trust Fund) funds a project implemented by Leonard Cheshire Disability Zimbabwe (LCDZ) to facilitate access to justice and services for women and girls with disabilities who are survivors of violence.

“I was assisted by LCDZ [after] my grandfather raped me. They assisted me to visit the hospital. I was accompanied by someone from LCDZ who knew sign language. At the courts I was accompanied by a sign language interpreter. [...] My grandfather was caught. He is in jail”, said Ashley about what happened to her and her experience with LCDZ. The interpreter also went with Ashley to counseling and supported Ashley with logistics such as transportation during her court case.

LCDZ understands the obstacles facing women and girl survivors of violence with disabilities seeking justice, including communication problems, especially for people with hearing difficulties; lack of access to infrastructure such as buildings and transportation; and negative and discriminatory attitudes towards people with disabilities.

In the past three years, the LCDZ project has provided specialist services to 738 girls and women with disabilities who are survivors of violence. The assistance has included legal advice, support persons, sign language interpretation where necessary, sign language classes, food, transport and accommodation.

So far, the project has taught 40 police officers sign language communication and trained 569 police and judicial officers in the basic skills needed when working on a case with a woman or girl survivor of violence with a disability. The project also empowers women and girls with disabilities to know their rights and to report acts of violence against women in their communities.

“Our work is unique in that it touches all girls and women with disabilities of all age groups and covers all disabilities”, said Isabel C. Chipunza, a LCDZ Case Management Officer.

On the National level, LCDZ together with partners, advocated for the then Ministry of Women Affairs, Gender and Community Development to incorporate disability in the 2017 National Gender Policy.

The UN Trust Fund recently announced the awards of nine new grants for projects working to prevent and end violence against women and girls with disabilities in 2018, worth a total of USD 2.9 million.

* Names have been changed to protect the identity of the individual.

[1] Ortoleva S. and Lewis H., Forgotten Sisters - A Report on Violence against Women with Disabilities: An Overview of Its Nature, Scope, Causes and Consequence (2012).