Case Study: Support for LBT survivors of violence in Albania 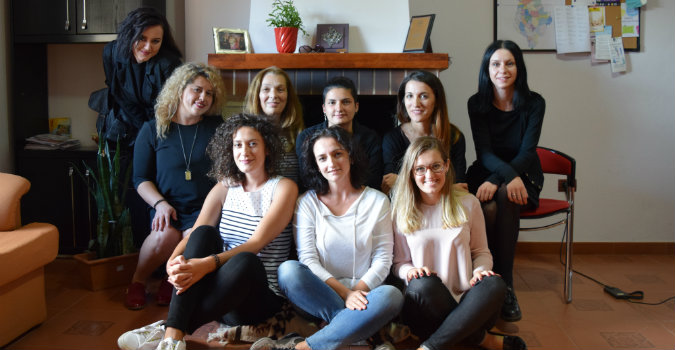 “Thanks to this programme I am better equipped to deal with [the] LBT community needs and help women who are victims of violence”. Flavia Tiona*, psychology specialist in Shkodra.

Despite recent efforts to address violence against women in Albania, the needs of LBT women remain largely ignored. This is primarily because of discriminatory attitudes of service providers and lack of awareness about the specific needs of LBT women. In 2014 the Alliance against the Discrimination of LGBT in Albania, (AALGBT) supported by the UN Trust Fund to End Violence against Women (UN Trust Fund), began a project called “Reduce Violence against Women with a Focus on the LBT Community”, which conducted the first large-scale research into challenges faced by LBT women and the gaps in institutional responses. AALGBT conducted its research though a participatory methodology involving local stakeholders and national public institutions to increase the level of ownership and ensure utilization of the findings.

The project was implemented in six regions: Tirana, Shkodra, Vlora, Elbasan, Pogradec and Diber, reaching 2540 women and girls and included a nationwide awareness-raising campaign. This project improved the delivery of specialized services for LBT women in five cities, by increasing the capacities of local women NGOs to better recognize and respond to cases of violence among the LBT community. Thanks to the project, the local women’s organizations have started offering group and individual support to LBT women in communities, and thus extending the reach of the project.

Trina*, a 22-year-old photographer in Shkodra, participated in the project because she experienced violence in her family for expressing her sexual orientation. She said:

“Women in Shkodra are beaten by their fathers and brothers if they try to speak or act their mind. I was one of them, but thousands of women in my city are victims of the patriarchal mentality that the men have full rights on their sisters or mothers”.

Trina used her talents to create posters featuring pro-LBT messages. These were put up in health care and education institutions in her city.

Flavia Tiona, an expert in psychology, participated in the training. She said she has worked with public officials in health and education who were unaware of the discrimination faced by LBT women and girls:

“I realized how bad the situation was when a nurse in Shkodra told me that we are a healthy country because of the lower numbers of LGBTI individuals.

“Patriarchal mentality makes people believe it’s ‘OK’ to violate a lesbian, bisexual or transgender [person], because they are different. People don’t understand that this can damage the mental health of a person from [the] LBT community and make them suffer or even try suicide“.

Dalila Dauidhi, a Doctor in training based in Tirana, Albania, received training and services from AALGBT and is now an active volunteer and advocate herself. After facing harassment first hand from a man who threatened her and her girlfriend in a café in Tirana, Dalila sought help from AALGBT who took the case forward on her behalf. She said that:

“Thanks to AALGBT we now have people to talk to about issues facing LGBT people in Albania - without shame. I have hope that things in Albania are changing and in Tirana at least there is less violence [against LBT people] and if we face violence we have somewhere to go”.

Dalila and other beneficiaries attended a Summer School organized by AALGBT which brought together mixed groups of young people. Dalila personally witnessed a man changing his attitudes thanks to the Summer School, where he publicly recognized his discrimination towards LGBT people in the past and said “I know now that LGBT people are friends”.

AALGBT’s efforts were recognized and acknowledged by the Government of Albania, which invited AALGBT representatives to participate in the development of the National Action Plan on LGBTI People in Albania 2016-2020, which was adopted in May 2016.

*Name changed to protect her identity.