“Because of [the project] I feel safe” 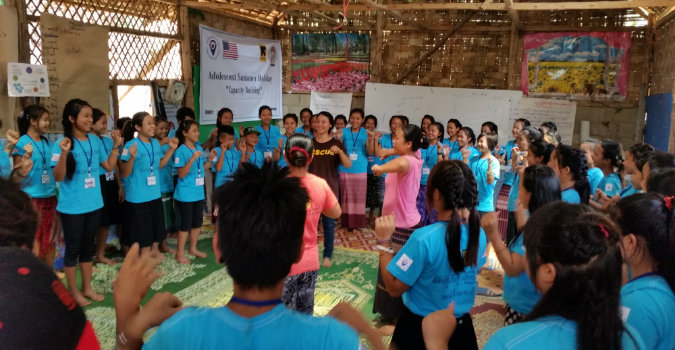 “When my husband beat me, I came here,” said Bu Meh (alias), a Karenni mother of five from Myanmar. She was referring to a community-based multi-sectoral project that works to end violence against women and supports survivors in one of the many Karenni refugee camps dotted along the Thailand-Myanmar border.

The project was implemented by the International Rescue Committee (IRC) in collaboration with the Karenni National Women’s Organization. The UN Trust Fund to End Violence against Women (UN Trust Fund) supports the IRC programme that responds to the needs of women survivors of violence.

A recent reproductive health assessment by the IRC in nine of the camps along the border found that more than one in five women had experienced some form of gender-based violence in their lifetime. Camp residents suffer in other ways too. Most refugees from Myanmar are not allowed to work in Thailand or to even leave the camps, leaving them dependent on foreign aid organizations like the IRC. Despite the humanitarian assistance, conditions in the camps remain harsh.

The project that helps Bu Meh also informs residents of the services available in the camp, including three safe houses that offer psychosocial support. It runs workshops to raise awareness about violence against women and the rights of women and girls. Thousands of adolescents, male and female, have attended the workshops.

By the end of the IRC-implemented project, the community-based organization Karenni National Women’s Organization had become the lead agency for services that address violence against women, including by taking over management of the safe houses. This was an important development for camp residents, who had relied on international NGOs for services for more than 15 years. It meant that the project had fostered local commitment to sustaining high-quality, gender-responsive services for survivors of violence in the camp.

“Because of [the project] I feel safe,” said Bu Meh. “I went to the clinic because of the violence… The staff always accompanied me and I received good service. The staff [helped me get services for my] health, psychosocial support, and other support.”

The UN Trust Fund remains committed to providing funding to organizations specifically addressing the issue of sexual and gender based violence experienced by refugee women and girls.

Read more: The UN Trust Fund commits $1 million for projects that address sexual and gender-based violence experienced by refugee women and girls, as part of the Clinton Global Initiative Commitment on Girls, Women and the Global Goals.