Case Study: 'We have made advances': Working together to end violence against underrepresented women in Chile 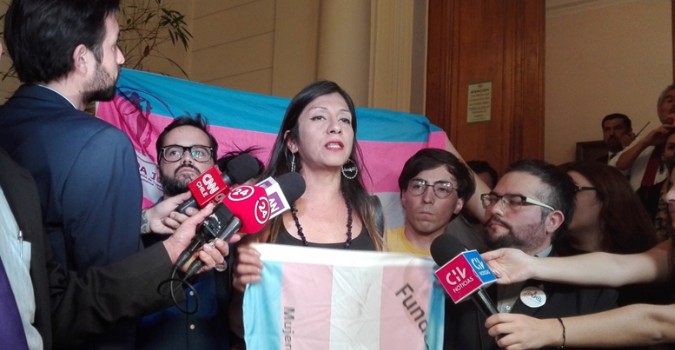 The president of Amanda Jofré, a member of the alliance working with Corporación Humanas, discusses the Bill on the Rights of Women to a Life Free of Violence. Photo courtesy: Amanda Jofré

"We face a lot of violence for our body, for being women, for being poor... We need empowerment, we need to work together... that's why it's so important that we fight to have a life without violence”, said Marcela Benavides Muñoz, President of the Emancipation Circle of Women and Girls with Disabilities of Chile (CIMUNIDIS). CIMUNIDIS works together with UN Trust Fund to End Violence against Women’s (UN Trust Fund) grantee, Corporación Humanas, in their project called "It happens to me, I tell, I prevent", which advocates to prevent and end violence against underrepresented women and girls in Chile.

Laws to prevent violence against women and girls in Chile have previously focused on violence in the private sphere; in the home and by intimate partners. Corporación Humanas’ work brings underrepresented women and girls together to assess the context and breadth of violence against them and to increase their visibility, advocacy and capacity building. The project brought together groups of migrant women, lesbian, bisexual and transgender women, women living with disabilities and women living with HIV/AIDS to advocate for a comprehensive law to end violence against women and girls that recognizes violence not only in the “private sphere” but also outside the family context.

During the project, Corporación Humanas and the organizations in the alliance participated in drafting a Bill on the Rights of Women to a Life Free of Violence which reflects the many manifestations of gender-based violence, incorporates provisions of the Convention on the Elimination of All Forms of Discrimination against Women, and encourages institutions and regulations to take an intersectional approach to ending violence against women. More than 600 underrepresented women and girls participated in active discussions of what the law should entail.

The inclusion of the diversity of women’s experiences in the language of the Bill is an historic milestone in Chile; the bill was presented to Congress at the completion of Corporación Humanas’ UN Trust Fund-funded project.

A member of ICW Chile said, "We see ourselves as women who are much more empowered. We have made advances in political advocacy... we are the ones who carry our own voices."

During the project, the seven organizations formed alliances and networks that made them even more visible and improved their local impact which spread to new arenas including governmental and local institutions. Advocacy around the law raised awareness of professionals working in public service institutions to the concept that violence against women is prevalent in institutions in order to end such violence.

A member of Amanda Jofré said, "We are living a very pleasant moment as an organization, because the struggle we have been carrying for a long time is bearing fruit."

Watch Marcela Benavides Muñoz, President of CIMUNIDIS, discuss the importance of inclusive laws that take a human rights approach including the perspectives of women living with disabilities.

Lorena Fries Monleaón, President of Corporación Humanas, speaks about what it means to leave no one behind in advocacy to prevent and end violence against women and girls.