“We decided to abandon these practices” – Boubacar Sissoko, a village chief 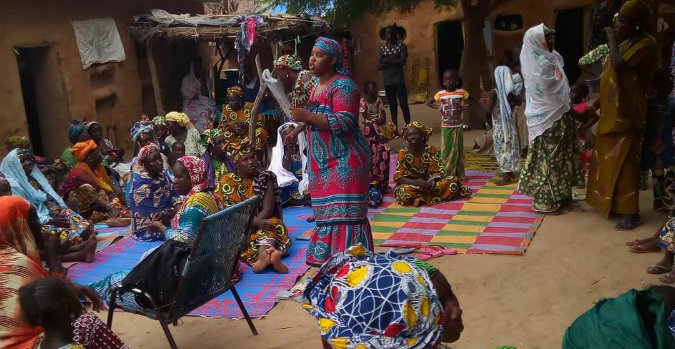 “We saw that our parents and grandparents practiced [cutting], we did not ask ourselves questions, we continued with the tradition,” said Boubacar, a village chief in Kayes region, Mali. Boubacar is speaking about the harmful traditional practice of Female Genital Mutilation/Cutting (FGM/C), which is inflicted on 89 per cent of women and girls in Mali, according to the World Health Organization. FGM/C has devastating health ramifications for women and girls, including pain, bleeding, permanent disability and even death. This harmful traditional practice is not yet banned in Mali.

The UN Trust Fund to End Violence against Women is supporting the Malian organization AMSOPT[1] to change social norms and provide access to medical and psychosocial services for survivors of FGM/C, which is often referred to as excision in Mali. The project’s awareness-raising efforts in the Kayes region, which has the highest rates of FGM/C in the country, have already led two villages to publicly renounce the harmful traditional practice as well as child marriage, and six others are in the process of doing the same. The two villages held public assemblies bringing together counselors, women, youth and village leaders to agree on the abandonment of FGM/C, and created a committee to ensure the application of the decision.

“With the arrival of the project in the village I benefited from several information sessions during which AMSOPT showed us photos, images and videos on the consequences of excision [cutting] and child marriage… [Eventually] we decided to abandon these practices”, said Boubacar.

In 2017, AMSOPT reached 5,182 women, men, boys and girls with information sessions about the negative and irreversible consequences of FGM/C on the sexual and reproductive health of women and girls. They also referred the participants to care services available for survivors, wherever need was identified.

“The training had a lot of impact on my life because I [now] have knowledge about the misdeeds of excision [cutting] and child marriage. I'm pregnant and if I have a girl I will not make her go through this practice... In my village, I will make sure that new mums fight for their daughters, sisters and mothers."

"The medical management of the complications of excision [cutting] has been very beneficial for the community because our women and girls are treated for free by the project… The project has allowed us to recover our health.”

An estimated 200 million women and girls alive in the world have suffered FGM/C. Globally, the UN Trust Fund supports 27 grantees that are working to change mentalities and attitudes that perpetuate harmful traditional practices and violence against women.

*Names have been changed to protect the identities of the individuals.

[1] In English, the Association for Monitoring and Orientation on Traditional Practices