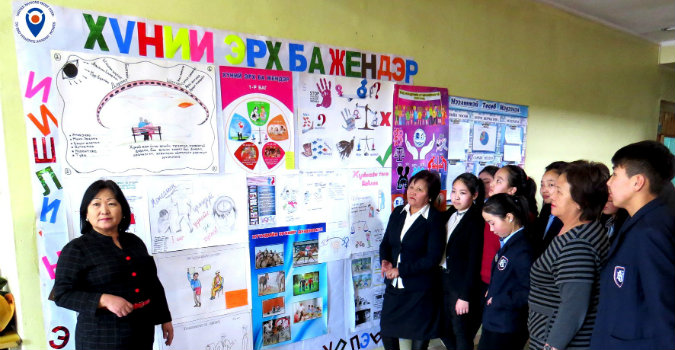 “I was appalled to find out how shockingly low my understanding of sex versus gender and gender-based violence was! I considered myself as a normal, nice person. However, after attending Gender-Based Violence Training of Trainers, I realised that I have been discriminating and oppressing kids.”

Narantuya R., a teacher at Gun Galuutai School in Mongolia’s Baganuur district, was describing the impact of “Securing state investment in awareness raising on violence prevention in schools”, a project run by the Mongolian Women’s Fund (MONES) and supported by the UN Trust Fund to End Violence Against Women (UN Trust Fund) with the aim to stop and prevent school-related gender-based violence.[1]

“I now put in check my every word and action!” she added. “For instance, I used to demand girls to clean up the classroom, or I accuse them of being slow and praise boys for their wits... We are better teachers now.”

Such awareness raising and violence prevention initiatives are essential in pursuing the change of attitudes and behaviours that reiterate gender stereotypes and lead to violence which are too often present in school environments. In April 2015 the project conducted a baseline study in four schools and found that of those surveyed:

- nearly two-thirds of girls had experienced violence in school or elsewhere; but

- more than a quarter of teachers and other school staff believed there was no violence in schools;

- only 10% of children thought that violence against women was unacceptable; and

- just 10% of children knew where and how to seek help. 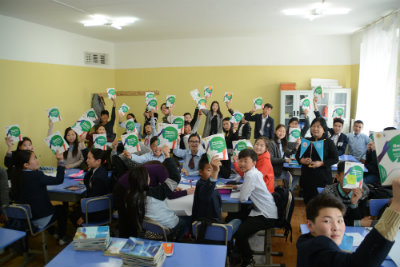 Mongolia’s capital Ulaanbaatar has some services for survivors of violence, but otherwise little is done systematically to address the problem. Rural areas are often neglected. There is no national programme to end violence against women and girls. Schools are not obliged to offer comprehensive education on the issue. To address these shortcomings, MONES has worked with local councils in Dornod province and Baganuur district to secure funding for awareness raising and prevention programmes in schools.

Since the project began in 2015, the UN Trust Fund supported MONES’s violence prevention programmes in four schools resulting in the participation of over 1,984 students in the violence prevention classes. The module covered, among other things, the concepts of gender, sex and human rights, as well as various aspects of gender-based violence and its prevention.

A young man studying at the Bolovsrol School, Baganuur district, summarized the success:

“I now have a zero-tolerance approach to any type of violence. I will make sure to protect myself, my friends from it and will work closely with teachers and staff of this school to prevent it.”

As a result of this violence prevention programme, boys and girls have increased their knowledge and understanding of gender-based violence by 30-60 per cent, and the four schools have already noticed changes in behaviour. Over 340 teachers have been trained to teach the module, and the employment agreement for teachers has been amended to prohibit corporal punishment.

A teacher-trainer in Baganuur district said:

"I have not realised how offensively discriminating I was prior to the training. I understood it during the training of my students. Now I pay more attention, in class and outside, to my words and actions, I try not to be offensive or discriminating. I also realised that I have been endorsing patriarchy at home."

The UN Trust Fund has supported the implementation of gender education programmes in 85 schools in 4 regions, including this project in Mongolia.

[1] For useful resources on methodologies and approaches in addressing school-related gender based violence (SRGBV), please consult the new Global Guidance on School-related Gender-based Violence, developed by UN Women and UNESCO, which provides key information to governments, policy-makers, teachers, practitioners and civil society who wish to take concrete action against SRGBV. It introduces approaches, methodologies, tools and resources that have shown positive results in preventing and responding to gender-based violence in school settings.

Click here to read the summary of this UN Trust Fund-supported project.