“I realized I wasn’t giving the necessary time to my daughter, and to my wife,” Emrah Gonuler explained, while drinking tea and watching his 3-year-old daughter draw during a visit to a Father Support Association in Istanbul. “[I have] started talking with her. Every day when she comes back from school we talk and she tells me what she’s done and what makes her happy and what makes her sad. … [This programme] has changed our lives as we are empowered to try and make a change.” 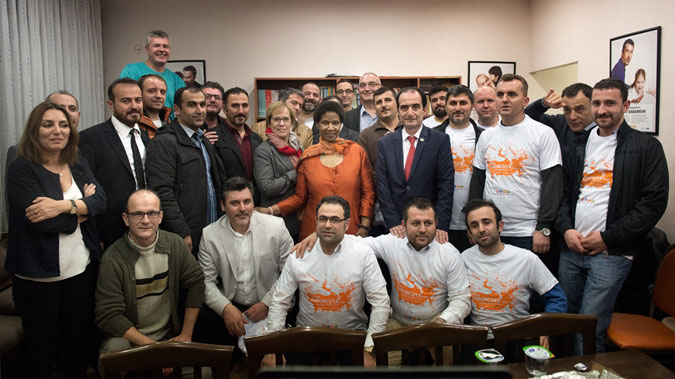 Emrah Gonuler is one of 20-25 fathers that join weekly sessions in the Istanbul Father Support Association, a ground-breaking fatherhood project in Turkey run by the Mother Child Education Foundation (ACEV), to discuss family issues and dynamics that lead to more equitable and non-violent households. ACEV’s Father Support Programme, which is funded by the United Nations Trust Fund to End Violence against Women, has a simple, yet life-changing aim: to prevent domestic violence against women and girls in Turkey by engaging men in a comprehensive and community-based prevention programme.

On 8 December, during the 16 Days of Activism, Under-Secretary-General and UN Women Executive Director Phumzile Mlambo-Ngcuka visited a group of fathers involved in the Father Support Programme. She went to see and hear for herself how the programme is transforming lives though the association based in Istanbul—one of the 307 Father Support Programmes in five provinces in Turkey (Bursa, Eskisehir, Istanbul, Izmir and Samsun) which together are expected to reach almost 4,000 fathers by the end of 2018.

During her visit, the Executive Director told fathers that they are “a vital part of the solution that has been missing” when working to prevent and end violence against women and girls. She continued: “There aren’t enough initiatives like this in the world yet, but your work here represents global best practice, and we will be working to replicate your successes.” The Executive Director concluded: “we are trying to change the world one family at a time, one father at a time.” 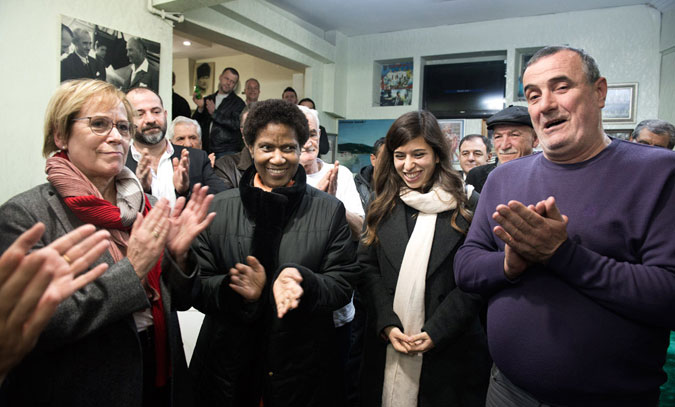 UN Women Executive Director Phumzile Mambo-Ngcuka spoke about how men can work to end violence against women with members of the Father Support Association in Istanbul. Photo: UN Women/Ventua Formicone

Creating a positive future begins in early childhood and fathers have a crucial role to play. However, many children are living in the shadow of what remains the most widespread form of violence around the world—violence in the home and family. In Turkey, a 2014 study by the Ministry of Family and Social Policies found that nearly 4 in 10 married women were subjected to physical violence by their husbands. The likelihood is that in many households children will have witnessed this violence, or experienced direct violence themselves.

Father Support Programmes run courses of 10–12 weekly 2-hour sessions where fathers meet to talk about particular topics, such as child development, encouraging positive behaviour or the challenges of being a father. In these sessions, fathers are encouraged to discuss sharing domestic responsibilities and become aware of the impact of sexist language in the home, along with non-traditional ideas about masculinity. The hope is that this greater openness in discussion and the understanding it generates will lead to less violent family environments.

The programme involves small, all-male groups and interactive and open discussions, which have been shown to be effective in working with men on prevention of violence. It also makes the most of peer influence by bringing together men who are members of the same community under the strong overarching concept of fatherhood.

Sharing the changes he has experienced in his behaviour as a result of this programme, one father said: “we learned about physiological violence… and I learned I do not have the right to emotional violence.” 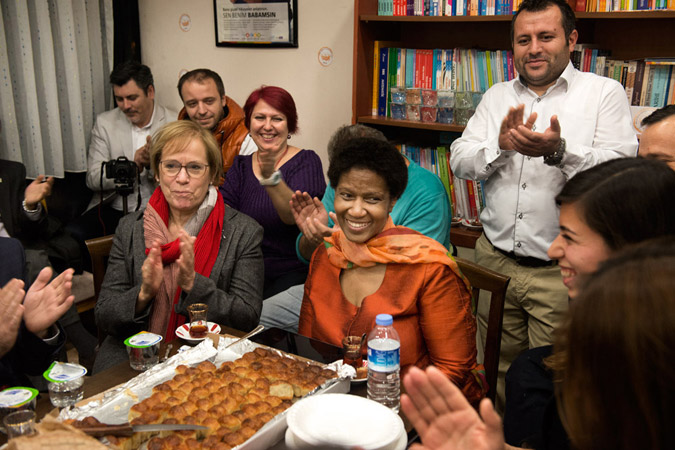 The results from the first phase of the project were so encouraging that it has been extended and will now run until 2018.

The initial project, which ran from 2010 to 2013, brought about a significant change in the attitudes of fathers towards violence and specifically violence against their children. Today, long after they completed the programme, men continue to meet, in both Father Support Associations with facilitators, and in non-formal environments such as in coffee shops in Istanbul where they continue to discuss topics and act as catalysts for profound, continuing and sustainable change.

“We aim for sustainable effects with this project by providing follow-up sessions, more trainings and more support for fathers after the programme. And [we] help them mobilize their communities and gather in father networks. Thus they can sustain the effects of [the] gains of the programme and also they can educate their peers,” Hasan Deniz, Manager of the parent training at ACEV.

There are clear signs that things are changing due to this programme. Independent evaluation reports suggests that fathers are able to establish warmer relationships with their children after attending these sessions. They highlight that the whole family dynamic benefits from more open communication, democratic approach and more awareness of different forms of violence.

Related News
18/08/2020
Investing in progress to ending violence against women
23/09/2019
Case Study: Engaging men to prevent violence against women in Turkey
25/04/2017
In the words of Ani Jilozian: “Ultimately, this violence stems from patriarchy”
02/06/2015
Girls kick violence with Grassroot Soccer
04/11/2022
#StoryOfResistance - Making the home a safe place for women and girls in Tajikistan
END_OF_DOCUMENT_TOKEN_TO_BE_REPLACED