On a windy afternoon in Khayelitsha, the largest informal township in Cape Town, South Africa, over 100 adolescent girls between the ages of 10-14 from Yomelela Primary School gathered to play soccer on a concrete ‘pitch’. Twenty Grassroot Soccer Caring Coaches encouraged the girls from the sidelines, guiding the ball between the makeshift goals.

On the first day of a week-long mission to South Africa, UN Women Executive Director Phumzile Mlambo-Ngcuka watched her play from the sidelines of the school courtyard as she met with members of Grassroot Soccer, a grantee of the United Nations Trust Fund to End Violence against Women (UNTF), which is managed by UN Women on behalf of the UN system. 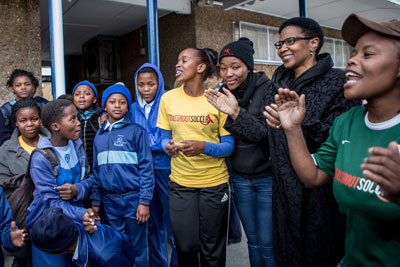 “The work being undertaken here is having a significant impact in this community; I am very impressed. There is much to learn here about the use of sports to boost girls’ empowerment. The issues facing young women in Khayelitsha are not unique – far from it. This programme is relevant to many vulnerable communities. With the right level of support it is highly scalable. I am particularly delighted to see so many of the young women who have benefited from the programme remain engaged and go on to become peer coaches and role models for their younger sisters,” said Ms. Mlambo-Ngcuka.

Founded in 2002 by four male professional soccer players who witnessed the devastating effects of HIV and AIDS among their teammates, this civil society organization uses the power of soccer to educate, inspire and empower young people to stop the spread of HIV and AIDS.

According to UNAIDS, a study in South Africa found that young women who experienced intimate partner violence were 50 per cent more likely to have acquired HIV than women who had not experienced violence. 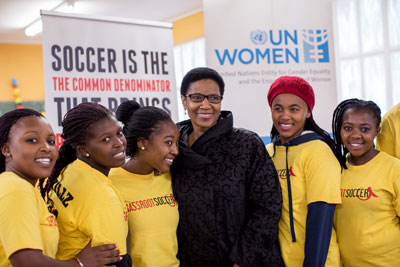 In 2009, Grassroot Soccer developed the innovative “SKILLZ Street” programme to specifically focus on young girls and address the unique needs of adolescent girls, who are at a higher risk for HIV infection than their male peers. With a UNTF grant of just over USD 500,000, the project is now expanding its sports-based interventions to foster girls’ empowerment, support girls’ awareness of sexual and reproductive health and increase girls’ access to medical, legal and psychosocial services, in coordination with the Thuthuzela One-stop Care Centres and civil society partners.

Along with athletic training, girls are mentored by slightly older peer coaches on preventing HIV and gender-based violence. Coaches share their own personal stories at the start of the programme and, over the course of 11 weeks, encourage participants themselves to open up, face their own challenges, and imagine the possibility of a future outside of the township.

As part of this programme, girls-only soccer leagues and tournaments are also being organized to mobilize community support and mixed-team tournaments to engage boys as allies in ending violence against women and girls. 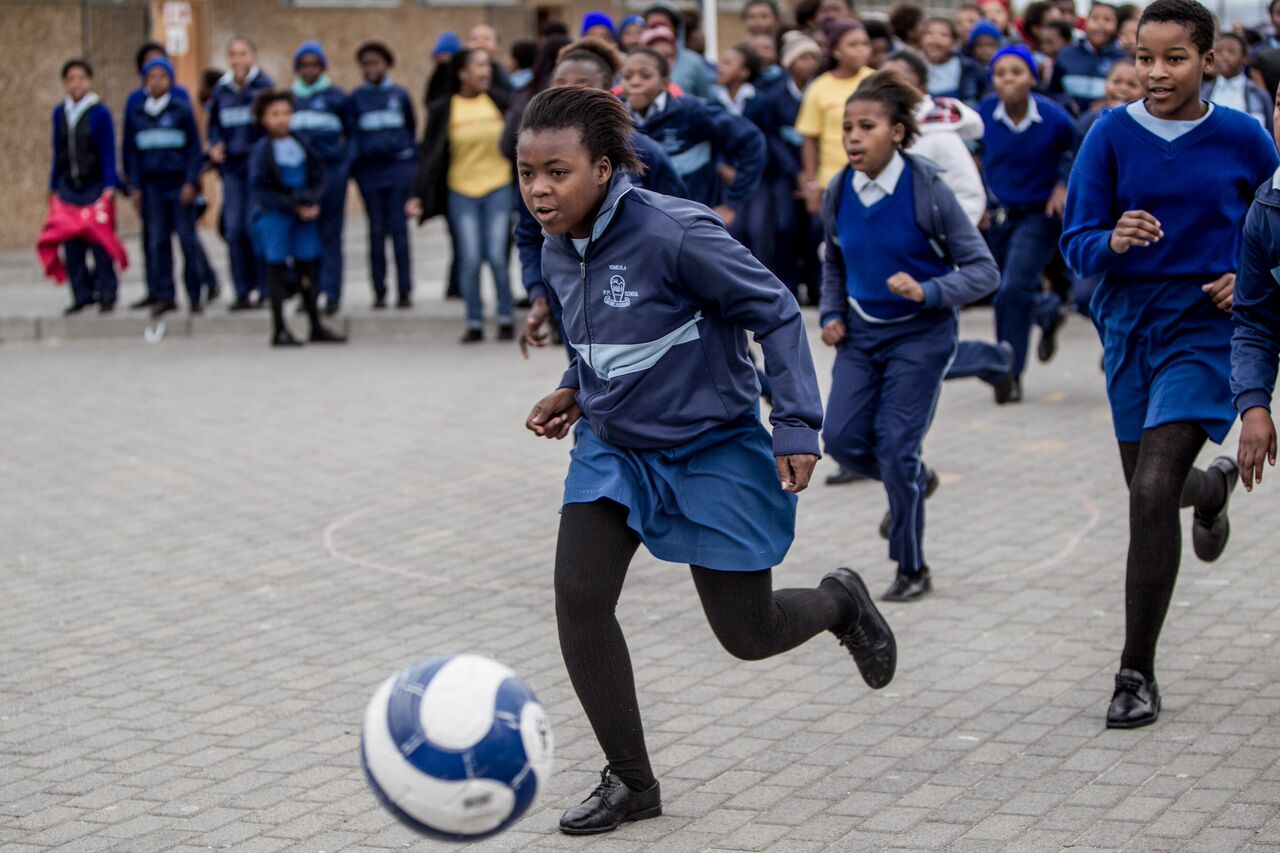 “For us, sport … means we can build relationships with children in a safe space that they are proud of participating in,” says Grassroot Soccer Managing Director James Donald. “It also provides a plethora of ready images, metaphors and analogies that children can relate to. Soccer, in particular, is a powerful way to challenge norms and stereotypes around gender.”

In 2014 and 2015, almost 3,000 adolescent girls ages 10-14 graduated from the SKILLZ Street programme in Soweto, Alexandra and Khayelitsha. With support from UNTF, the organization plans to reach an additional 5,600 adolescent girls in five South African sub-districts by the end of 2016.

Back at Yomelela Primary School, before the soccer fun kicks-off, peer coaches facilitate a high-energy session where difficult but vital conversations are held to guide these young girls on taking care of their bodies and living a healthy lifestyle – irrespective of their HIV status. The hope and energy in the room is palpable and it’s clear that for these girls change is happening right in front of their eyes.

“Before I was a member of SKILLZ Street I didn’t know where I was headed,” admits 14-year-old Ms. Nqweniso. “But now I know where I’m from, where I’m headed, and where I want to be in the future. It’s built so much confidence in me, because I know what’s ahead for me. I feel proud of myself that I am part of the positive side, the safe side.”