“With the support and help of the UN Trust Fund in terms of results-based project management we expect to achieve our results with even more beneficiaries than expected.”  UN Trust Fund grantee, 2016

A key aim of the UN Trust Fund is to build the capacity of grantee organizations to sustain their achievements beyond the duration of the project.

In an annual partner survey comprised of 20 questions, we asked grantees to tell us how we are performing in that endeavour.[1] We asked about the support provided by the UN Trust Fund team, the added value of its grants compared to other donors, and ideas for improvements. 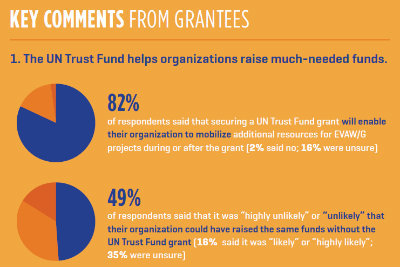 Key comments from grantees in the 2016 partner survey.

UN Trust Fund grantees shared examples of their expanded efforts to prevent and end violence against women with additional funding following the documented success of their UN Trust Fund-supported project.

See the summary of the 2016 survey of grantees here.

[1] Answers are provided anonymously online. In 2016, 85 organizations representing a good cross-section of grantees completed the survey.