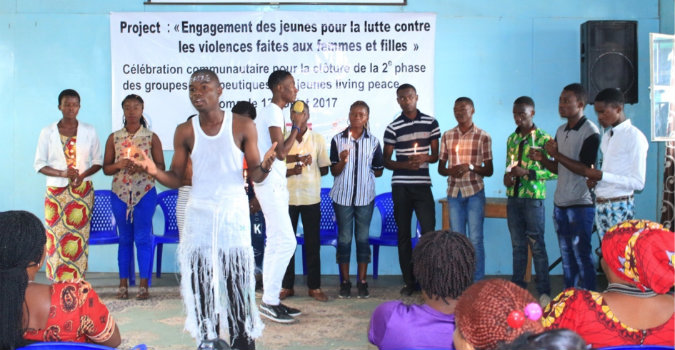 Young people participating in a component of Promundo's project focusing on gender equality in the Democratic Republic of the Congo. Photo: HEAL Africa

On 15 March 2018, the UN Trust Fund to End Violence against Women (UN Trust Fund) organized an informal discussion and knowledge sharing session on “Why data and evidence matters in UN Trust Fund projects: how to use data and evidence to effectively scale-up, replicate and sustain project results, and make the case for reinvestment.” This was the fourth in a series of UN Trust Fund organized informal brownbag events hosted in conjunction with the 62nd Session of the Commission on the Status of Women.

The UN Trust Fund and its grantees place a strong focus on the role that evidence plays in increasing and sustaining investments in projects to prevent and end violence against women and girls. Collecting data, testimonies, and documenting experiences of women and girl survivors of violence as well as from men, boys, service providers, and faith leaders, for example, are essential to evaluate and improve prevention efforts and responses to violence.

The presenters identified key areas of focus for successful replication and scaling of projects funded by the UN Trust Fund. These include:

ACDemocracia spoke about their work to ensure access to justice for women survivors of violence in 10 districts in Ecuador. In January 2018, thanks to their advocacy with civil society and the mobilization of communities, a new Comprehensive Law for the Prevention and Eradication of Violence against Women was approved with 90% votes in favor by the government in Ecuador. Ms. Carrera spoke on how the organization will scale-up and coordinate with ministries to ensure the implementation of the law. The support of the Government is crucial as Rocío Rosero, Vice Minister of Economic and Social Inclusion said, “The resolution that we adopt today, sets out to eradicate violence against women and girls, as a national priority. This shall be a shared priority for all political parties, for all commercial interests, for social organizations, and for all of the functions of the State.”

Operating in Brazil and the Democratic Republic of the Congo, UN Trust Fund grantee Promundo spoke about data that shows an increase in knowledge about gender and an increase in non-violent communication as a result of their project, as a case for scaling up their efforts. Reports included a 28 per cent decrease in female participants in Brazil reportedly being humiliated or insulted in the previous three months. A female participant in the DRC said, “I have confidence in myself now. I have seen that girls can do a lot of things. Having the facilitators and talking with other girls helped me to choose my goals, to choose my friends better – those who will be [a] good influence for me and my future.”