Case Study: What grantees say about the UN Trust Fund

Through the UN Trust Fund’s annual partner survey and through a survey in conjunction with its mid-term review of the strategic plan 2015-2020; the UN Trust Fund heard from its grantee partners around the world. 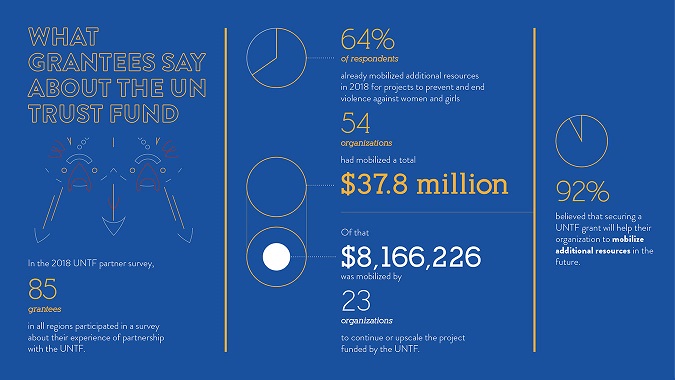 An infographic detailing results from the UN Trust Fund's annual partner survey in 2018.

In the 2018 UN Trust Fund annual partner survey, 85 grantees in all regions participated in a survey about their experience of partnership with the UN Trust Fund as it relates to their continued resource mobilization.

“The [UN Trust Fund] is a highly professional organization in the area of gender-based violence and having a project from them gives a high profile to the grantees.”
Grantee

Of those that responded, 64 per cent already mobilized additional resources in 2018 for work to prevent and end violence against women and girls: 54 organizations had mobilized a total of USD 37.8 million. Of that USD 8,166,226 was mobilized by 23 organizations to continue or upscale the specific project funded by the UN Trust Fund.

In addition, 82 per cent reported having joined or created useful new partnerships (non-financial) in areas such as learning, knowledge exchange, or advocacy in the field of ending violence against women and girls in 2018 thanks to the UN Trust Fund grant.

“[Our] visibility has significantly increased in Cameroon thanks to the UNTF funding”, said one grantee as a comment in the survey.

“The UN Trust fund award has supported and will continue to support us in resource mobilization efforts in many ways”, said another grantee.

Another grantee added, “The Trust Fund grant was pivotal to initiating the project and certainly was the basis for additional resources to complement the project”. 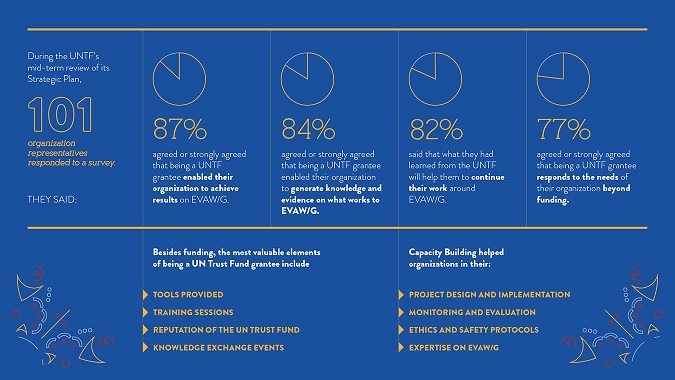 An infographic of responses to a survey by grantees in conjunction with the mid-term review of the UN Trust Fund's strategic plan.

During the UN Trust Fund’s mid-term review of its Strategic Plan, 101 organization representatives responded to a survey.

One grantee said, “The UNTF has been exceptional in offering support to my organization and enabling us [to] achieve the project goals and objectives, keep up the good work”.

“[Keep it up with the] openness and flexibility to respond to emerging realities and making the work relevant to communities and the organizations”, said another grantee in the survey.

“Being a UN Trust Fund beneficiary opens doors for us”, said a grantee during the survey process.