Case Study: Advocating for services and legislation to protect survivors of violence in Ecuador

"We have to eradicate all forms of gender-based violence. So that our girls do not have to go through what we have gone through", said Carmen Jeréz a councilor in the city of Pelileo in Tungurahua Province, Ecuador. Carmen supports women to report violence and seek services in her community in Tungurahua, which has one of the highest rates of violence in the country.[1]

This is one of 10 districts in Ecuador where ACDemocracia, a grantee of the UN Trust Fund to End Violence against Women, is working to address gaps in service delivery and to guarantee women’s access to justice within the project titled,“Integral intervention to guarantee access to justice for women survivors of violence.”

At the beginning of the project, mayors from Tungurahua province learned how widespread violence is in their communities. Cecilia Chacón, the first female deputy prefect in Tungurahua, recalls the surprise and shock from the mayors upon hearing that there were 5,986 recorded cases of violence reported to the authorities between January and September 2015. "That day we could feel the political will, we could feel the support; and now the mayors are the main promoters of this public policy", says Chacón.

ACDemocracia works to mobilize communities and train leaders. So far, within the framework of the UN Trust Fund- supported project, they have trained 313 women leaders of organizations in the National Coalition of women’s groups to increase their capacity to advocate for women’s rights and specifically for the adoption of comprehensive legislation for the prevention and eradication of violence against women in the country. They also trained 54 government officials, 49 reporters and 532 university students.

"I realized that we women did not have a voice. We never spoke and were afraid of being criticized”, said Martha Chango, the Municipal Councilor of Pelileo, who is also the Chair of the Gender Commission in Tungurahua province. "Previously violence was well hidden, as it was handled more in the family and we did not dare to report it", says Chango. 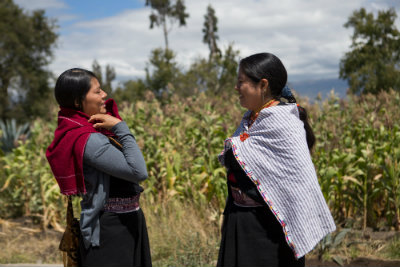 Martha Chango (right) in Tungurahua province where she works as the Municipal Councilor of Pelileo and the Chair of the Gender Commission. Photo:Michelle Gachet / UN Women

ACDemocracia expanded their local grassroots efforts towards larger goals in the country. Working closely with local feminist institutions and through joint advocacy with the National Coalition of women, ACDemocracia collaborated with civil society organizations, academic institutions and the state to gather over 37,000 signatures calling for a new law. Their mobilization also reached over 150,000 people through social media. This advocacy came to fruition in January 2018 with the adoption of a new Comprehensive Law for the Prevention and Eradication of Violence against Women, which was approved with 90 per cent of votes in favor by the parliament in Ecuador.

"We are convinced that a democracy that ignores the interests of half of the population is not possible”, said Rocío Rosero, Vice Minister of Economic and Social Inclusion and former Director of ACDemocracia about the adoption of the new law.

Previously, the criminal code in Ecuador only included protection measures that would go into effect if a woman filed a complaint directly with the judicial system. The new comprehensive law established special procedures and speeds up response times. For example, public servants (police officers, justice operators and other authorities) are now required to take immediate, timely and effective measures to any threat or act of violence against women.

ACDemocracia is one of 13 current UN Trust Fund grantees that are working to change local or national policies or protocols on violence against women.

Related News
17/02/2022
Safeguarding sexual and reproductive health and rights for women and girls with disabilities in Argentina
18/02/2021
In the shadow of COVID-19: Adapting to protect women from violence in Colombia
22/10/2020
Costa Rica: Leaving no woman behind during the COVID-19 pandemic
18/08/2020
Investing in progress to ending violence against women
22/07/2019
Case Study: 'We have made advances': Working together to end violence against underrepresented women in Chile
END_OF_DOCUMENT_TOKEN_TO_BE_REPLACED